Please install Yoast SEO plugin and enable the breadcrumb option to use this shortcode! 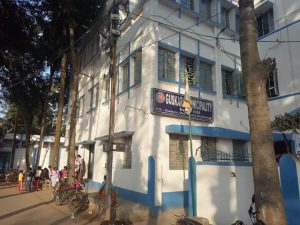 Guskara Municipality is under Aushgram police station in Bardhaman Sadar North Sub-division of Purba Bardhaman district in the Indian state of West Bengal. Guskara is located at 23.50°N 87.75°E. It has an average elevation of 38 meters (125 feet). The Guskara Municipality was established through publication of G.O. No. 483/C-4/MM-5-1/84 dated 24th July 1985, issued by the Department of local government & Urban Development Authority of West Bengal on 1st March 1988 taking 11 Nos. of Mouzas (Full 9 and Partly 2 No) under this Jurisdiction. The municipality situated at the northern part of the Purba bardhaman District, just 33 K.M. away from Bardhaman Town. The Bolpur Town(Santiniketan) a subdivision of Birbhum District is Situated at the northern side of this town near about 18 K.M. It occupied the central position of three police station namely Aushgram, Bhatar & Mongolkote. The Guskara Town is Connected by the Bardhaman – Sahebganj Loop Line. It is well connected with the industrial town like Asansol, Durgapur, Howrah & State Capital Kolkata by roads as well as Rail lines. A branch of Ajay River namely Kunur passes through the Town. As per the 2011 Census of India Guskara had a total population of 35,888, of which 18,573 (51%) were males and 17,315 (49%) were females. Population below 6 years was 3,544. The total number of literates in Guskara was 25,525 (72.13% of the population over 6 years).